Most homeowners are intimidated by the concept of home theater. They think that it means a lot of money. But a home theater is just an audio and video equipment set up in your home that mirrors the movie theater experience. With proper planning, you can have an organized, functional, and visually pleasing home theater set-up that suits your needs. 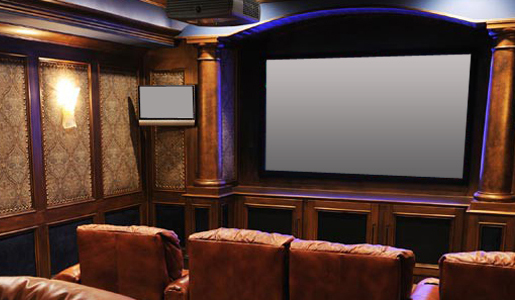 For those who are willing to splurge, a high end large screen TV or video projector, Blu-Ray Disc or Ultra HD Blu-ray players, a media server, cable or satellite, separate amplifiers for each channel controlled by a master preamp or controller, in-wall speakers, and a couple of subwoofers  can be included in your set-up. However, there are also modest set-ups for those whose priority is practicality. A simple 32 to 55-inch TV, combined with at least a DVD player sound bar or a Blu-ray Disc player combined with a stereo or home theater receiver, speakers, and a subwoofer works fine as well. If you are willing to spend just a bit more, you can upgrade to a 4K Ultra HD LED TV.

Most home theater systems today include internet streaming in the set-up. This gives you access to internet streaming content including movies, TV shows, and music. There are TVs and Blu-ray Disc players that can directly stream TV shows and movies from the internet. But if your TV does not have this capability, there are affordable media streamers that you can be buy in the market.
Whatever type of set-up you choose, the important thing is that it gives you the entertainment you need and want. Consult with our professional team at A Plus Cable Runners to know more about the options available for you and your budget.
stratweb2021-11-23T14:25:05-05:00November 25, 2018|Home Theater Cabling|